Free shipping on orders $150 or more Domestic orders only
Gift Cards available! Scroll to the bottom of the home page to purchase 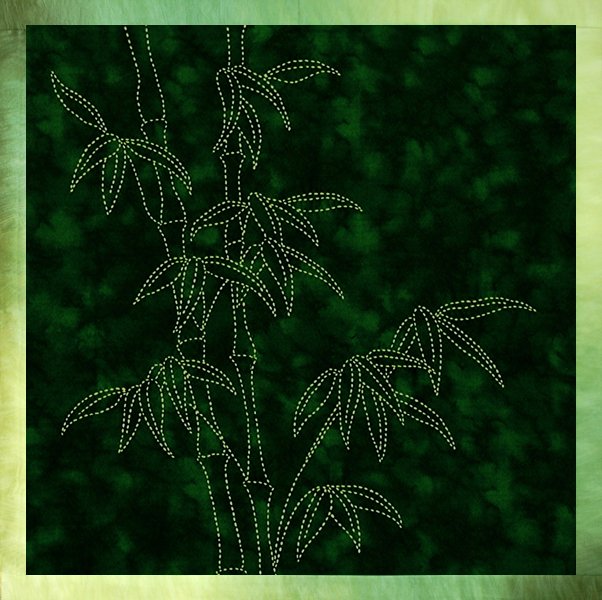 We do not accept American Express
Bamboo Sashiko Panel from Tropical Foliage Series
Check out the 8 other designs in the series!
These tropical sashiko foliage blocks were inspired by my time as a gardener in the National Tropical Botanical Garden on Kauai, Hawaii where I worked with endemic, indigenous and exotic plants.
Here is a description of each foliage block:

Bamboo Easiest; good for beginners
This versatile and giant member of the grass family is able to grow more rapidly than any other plant. After two months of growth it is the size it will remain for its lifetime. Bamboo is one of the most useful and practical plants for humankind, providing water storage, food, raw materials for household and garden use, musical instruments and more.`Ohe is said to be one of the "canoe plants" brought to Hawai`i Nei by early Polynesian settlers in their oceanic navigation. This plant may have originated in India or Java. There are two types of `Ohe or "Hawaiian Bamboo". One is Schizostachyum glaucifolium and the other is a green Bambusa vulgaris. Both are clumping bamboos.

Breadfruit (Ulu)
(Artocarpus altilis) is a species of flowering tree in the mulberry and jackfruit family (Moraceae) originating in the South Pacific and eventually spreading to the rest of Oceania. British and French navigators introduced a few Polynesian seedless varieties to Caribbean islands during the late 18th century, and today it is grown in some 90 countries throughout South and Southeast Asia, the Pacific Ocean, the Caribbean, Central America and Africa. Its name is derived from the texture of the moderately ripe fruit when cooked, similar to freshly baked bread and having a potato-like flavor.

Koa
Koa Wood is legendary in Hawaii. Not only is this amazing wood native to Hawaii but it is known for the deep rich colors and varied grain pattern. Koa has honored heritage in Hawaii and is highly revered and sacred. The word “koa” means “warrior” in Hawaiian. The warriors of King Kamehameha the Great, created canoes and weapons from a wood plentiful on the Big Island of Hawaii. This wood became synonymous with the warriors themselves, and it became known as koa.


In ancient Hawai?i, kukui nuts were burned to provide light. The nuts were strung in a row on a palm leaf midrib, lit on one end, and burned one by one every 15 minutes or so. This led to their use as a measure of time. Hawaiians also extracted the oil from the nut and burned it in a stone oil lamp called a kukui hele po (light, darkness goes) with a wick made of kapa cloth.

Hawaiians also had many other uses for the tree, including: leis from the shells, leaves, and flowers; ink for tattoos from charred nuts; a varnish with the oil; and fishermen would chew the nuts and spit them on the water to break the surface tension and remove reflections, giving them greater underwater visibility. A red-brown dye made from the inner bark was used on kapa and aho (Touchardia latifolia cordage). A coating of kukui oil helped preserve ?upena (fishing nets) The nohona wa?a(seats), pale (gunwales) of wa?a (outrigger canoes) were made from the wood. The trunk was sometimes used to make smaller canoes used for fishing] Kukui was named the state tree of Hawaii on 1 May 1959 due to its multitude of uses. It also represents the island of Moloka?i, whose symbolic color is the silvery green of the kukui leaf.

Laua'e Fern
Laua'e is indigenous to Hawai‘i. The Hawaiians adopted it for scenting their kapa cloth. Laua'e is sometimes broken into sections and twined with pieces of the Hala (Pandanus) tree for lei makings. You can find this fern in most resorts and gardens where it grows abundantly.

Monstera
Monstera is a genus of about 50 species of flowering plants in the arum family, Araceae, native to tropical regions of the Americas. The genus is named from the Latinword for "monstrous" or "abnormal", and refers to the unusual leaves with natural holes that members of the genus have.

Taro (kalo)
Kalo was the main staple for Hawaiian people. In order for wet taro to grow it needs a marshy environment. For dry taro, it needs moist uplands.  It was Polynesian introduced. The Hawaiians used kalo for healing herbs, and food. Hawaiians would pound the taro to make poi as one of their meals for the day.

Ti
This plant is Polynesian introduced, which means that it was brought to Hawai‘i by Polynesian settlers. There were many medicinal uses. It was used to wrap other herbs needed to be baked or broiled. Kï was known as a resemblance of the god Lono. Hawaiians would lay the leaves of the tree on top of the structures in his heiau to show their respect to him.

Tree Fern (Hapu'u)
The häpu‘u fern is endemic meaning that it came here on it's own and is found nowhere else in the world. The tree heart of this fern was used as a starch for food and for laundry in the 1920's. There are 50-70 pounds of starch in the trunk.